I picked my boy up from camp yesterday, weary from my day and the hot, summer weather we’ve all been wishing for lately. I was looking forward to a quiet, unstructured week-end for a change. As I headed towards the chalet, I heard a faint, familiar voice yelling “mummy”, and spotted Sean with head counsellor, Meghan. She had her arm around him and as I got nearer, I noticed his flushed, tear-stained face. “Something happened,” Meghan said, “and Sean is very worried you’ll be angry with him. He cried a lot today.” She explained that one of other kids had reared his head up abruptly, hitting Sean in the mouth hard, which caused his front tooth to chip. On cue, Sean opened his mouth to show me the damage and unprepared, I exclaimed in dismay, “Oh, no!”. Immediately, his face crumpled and he burst into tears. All I could do was hold him and soothe him and reassure him that I wasn’t angry, that it was an accident, that it didn’t matter.

But the truth is, it did matter to me and I was angry. Not at him, not at the special needs child who could not control his impulses, not at the young counsellors who were devoting their entire summer to these kids as volunteers. I was angry at myself.

I was angry at myself for putting my need to do more, to be better than I am, to give what isn’t mine to give, to fill a void that will always be empty because I choose to keep it that way, ahead of what may be best for my son.
Throughout the evening, he stressed about the tooth, about my initial reaction (how I wish they had given me a head’s up so that I could take it back) and what his dad would think. He pondered whether or not he would be able to crunch down on a hard candy ever again and asked me if the tooth could be fixed. I really don’t know if it can. Yes, he frets, he worries, he makes mountains out of molehills, just like his mother.
Except I had to remain calm and nonchalant for his sake. I asked him if he wanted to go back to camp next week. He said yes, despite the fact that he had been kicked and bopped in the head and exposed to some serious meltdowns by the other campers this past week. Part of me is so proud of him. The other part, of course, wants to keep him safe and intact at his grandparents’ next week.
I left a message with the person in charge of the camp last night. Despite how he feels, I need reassurance that he is going to be okay. And then I bawled, for the piece of tooth that was now gone, for what was lost, for my son, and for me. 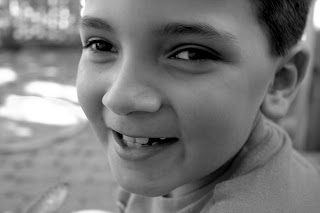 2 thoughts on “What Was Lost”

Dished Wanderlust
Family In the 2020s

Make an impression wherever you go!

Traveling through books one page at a time.

Reader by Day. Writer by Night.