I’m not a good traveller. As much as I am drawn to the idea of seeing the world while ticking items off a bucket list sort of itinerary, I love staying home even more. The fact that I am height-challenged and can never reach the overhead bins in the plane doesn’t help, never mind that lifting heavy bags like that is poor ergonomics in the first place. Flight attendants, I feel your pain.

But the worst part of traveling for me, is having to leave my pets behind. The very thought of it renders me to a hand-wringing, horribly guilty state. Heartbroken really. We have three birds and two dogs to board. The birds are fairly new acquisitions but no easier to care for. These small feathered beings recognize us, socialize with us and do not cope well with change. My husband says I am anthropomorphizing them.
Finding resources to look after them has been challenging because most people who love animals have their own menageries to care for with little room at the inn. Plus, the fact that it’s summertime with overlapping vacation periods.
One positive aspect of being an anxious, over thinker is that I gave myself plenty of time to come up with a plan. Our groomer, Tania, will be looking after the dogs. Whereas I don’t know her personally, she does a great job cleaning them up, takes them on very short notice when there is a “poop” emergency and consistently tells me how sweet and well-behaved they are. What sealed the deal though was when she said, “They can even sleep with me if they want!”. Only a true dog lover would ever considering sleeping with boarders.
The birds were a little trickier to place. It had to be an experienced “bird person” as they have
particular needs and tendencies. Based on recommendations from a couple of friends, we booked three spots at the the Veterinary Hospital for Birds and Exotic Pets in town. This had to be organized
well in advance as the prerequisite was a full medical exam as well as preventative treatments for
parasites. While we were there, we decided to have a DNA test done for our albino cockatiel, Johnny Winter, and discovered that she was in fact Betty White incognito.
Yesterday morning, my husband and I washed all the cages, loaded the birds in their carry cages, and transported them into town. The technician who checked them in was great. Efficient, kind and very knowledgeable. Betty White was placed next to two other cockatiels named Bob and Bill and Eugene Blue and Limoncello were side by side just like they are at home. Full disclosure: I bawled my eyes out later in the car.
And I cried again when the vet called me a few hours later to say they were worried about Chelly, our barred parakeet, who had been fluffed up and lethargic for hours. Could be stress or could be that she is ill, the vet explained. Not wanting to take any chances, particularly as we would be out of reach the following day, I gave her permission to do an exam and culture. The vet called me back around 8:30
pm. The culture was positive for a crop infection, was treatable with antibiotics and had a good
prognosis. It was only after the vet hung up that I remembered something. For the past couple of weeks, whenever I kissed Chelly on her little head, I noticed a sour odour, almost like urine. I wondered about it at the time and sprayed her more regularly with the water bottle (she loves having a shower, then preening herself). But the smell lingered. I had also noticed a few times that she stayed in her cage rather than run out to greet me when I opened the cage door with her comical, chicken wearing pyjamas, belly to the ground kind of gait.
In retrospect, thank goodness we decided to board them at the avian vet’s. Not being experienced bird owners, we may have let this go on too long with dire consequences. Birds are fragile little things; when they are ill, their condition can deteriorate rapidly.
We still have to drop off Sami and Gami shih tzu later this afternoon. It’s like they know what’s in the
air. Neither of them have eaten today. Ugh.Part of me (the adventurous, bucket-list part) is really looking forward to this trip. It will be good to see family overseas again and for my husband to see the land of his forebears for the first time. That being said, I am already looking forward to being reunited with the fids and the fur kids again.À bientôt! 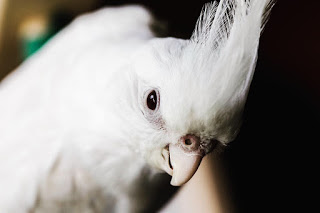 Make an impression wherever you go!

Traveling through books one page at a time.

a look into the mind of a crazy indian girl