A beloved family friend died on April 3rd, following a brief illness, and broke our hearts. Unable to attend the funeral in Toronto, I helped my father formulate some memories into a eulogy, one that was read by Auntie Pat’s son-in-law, Peter, at the ceremony. I then did the same with my own recollections, crying buckets in the process.

Many of you may know Auntie Pat already, by her claim to fame as cover model for the Supertramp album, Some Things Never Change. Her resemblance to the Queen of England landed her that gig.

The first text is mine:
Yesterday evening, looking for inspiration, I asked my husband to grab a big white box marked “memories” stored high on a shelf in my bedroom closet. In it were a bunch of diaries from my childhood. The oldest one had “Five Year Diary” written in multiple languages all over its black and yellow binding, with a broken clasp in front that once purported to keep the musings of this grade schooler safe from prying eyes. Flipping through it, I needn’t have worried about the contents being exposed as the writing was pretty innocuous. Each page allowed five separate entries, one for each year, with a ration of four lines per annum. The first entry was on February 20th, 1973, my tenth birthday. It read “My Birthday and I got this diary and a Cup from Antie Pat and family.” Amused, I noted that “Auntie” was misspelled and random words were capitalized. What struck me as I skimmed through the entries was that we got together with our friends the Dhillons at least several times a month, be it for birthday celebrations, holidays or just because. Every two months or so, we ate at the Ponderosa Steak House. And whenever anyone from our respective extended families was coming from or heading overseas, we would all meet at the local international airport to either greet them or send them off. I know this because I’d crammed all the “who’s who” details into four lines of text in my diary. School night or week-end, it was simply what we did. Indeed, there is a small black and white photo of me, my cousin Eira, and Auntie Pat’s daughter, Cheryl, taped at the back of the diary, taken when Eira and her family were visiting from England in July 1973. 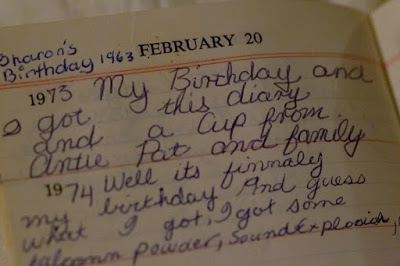 The Dhillons were our true Canadian family growing up. They were the only other family we knew with an East Indian dad and a British mom and Cheryl and Robin were our “too cool for school” older cousins by association. Considering the political and racial climate back then, I think the friendship between our families provided our parents with unconditional support for all the challenges a mixed race marriage can bring, particularly one that produces light brown kids. It normalized our unique situation and provided us with a model of community that eventually included other open and like-minded people. Their friends were our friends and vice versa. As kids, we felt safe and we felt loved, and that, at least for me, provided the foundation for a very happy childhood. It is why neither the miles that have separated us since their move to Toronto, nor the years that have flown by, have ever shaken the deep connection our two families have. And it explains the extent of our grief at the loss of our beloved Auntie Pat.

I have parents and they had these amazingly vibrant friends who would stay up to ring in the New Year long after I had gone to bed, who would dress up for any occasion and dance the night away, who twinkled under holiday mistletoe like teenagers, who outdid one another year after year with their halloween costumes, and who had an Easter party one year and hopped down the stairs wearing bunny ears and cotton tails. Auntie Pat was usually the instigator and everyone else followed suit.
Cheryl and Robin, we had mothers who married for love and who had the courage and sense of adventure to travel the world at a time when there were no travel guides or itineraries. They raised families, drove cars and worked outside the home when so many of their generation didn’t. They made true, long-lasting friendships, held dinner parties, and together with our dads, connected our respective families over three continents. They sewed, crocheted and knitted endless costumes, including that crazy teddy bear head for Uncle Dhil.

Our parents partied until poor health no longer allowed it.

Our Auntie Pat was a great story teller and that’s how I remember her best: setting the stage, commanding her audience, elegant hands conducting, laughing that irrepressible laugh of hers through its telling. It’s the picture I will keep in my head whenever I think of her, with love and gratitude for having known her.
We wish so much that we could be there in person with you all today. We share the pain of your loss today and join you in spirit as you celebrate the life of our wonderful Auntie Pat.

And from my dad:

Our friendship began in 1968 when I met Raghbir at an engineering conference in Montreal.
Our lives would forever be intertwined when I bumped into him again at the airport in July of that same year as coincidentally, we were both waiting for our respective wives and children to return from the UK.
From that day onwards, our families spent holidays together: Halloween, Christmas, New Year’s, Easter, long week-ends, and summer vacations. We camped together: weekends in Massena and longer road trips venturing further South in the summer months. There were barbecues in the summer, new restaurants to try when nobody felt like cooking and monthly dances at the local dance club where new friends were made. We attended many of the speeches that Dhil made through the Toastmaster’s organization and were so proud of his accomplishments.
Even when they moved to Toronto, Pat and Dhil would return to Montreal every New Year’s Eve to ring in the new year with some dancing and partying with old friends. Once a year, time stood still, and we cherish those wonderful times. Of course, we made it down the 401 on occasion too, and have fond memories of visiting Toronto one year to watch The Phantom of the Opera. Life was always brighter, more fun, with Pat around.
Just before our 25th wedding Anniversary, my wife asked Pat to look out for a gold bangle for me, an important symbol of Sikhism. Pat and Dhil brought it all the way from Toronto and helped us celebrate our silver milestone. Thirty one years later and I have removed it only twice, both times for cardiac surgery. Indeed, it is a daily reminder of her and how thoughtful and considerate she always was.
Pat, you were always on the go: smart and filled with energy for new business ventures, travel itineraries and fun-filled projects. You were, hands-down, our children’s favourite auntie, not by blood but having earned that spot early on in our friendship. Your children are loved by us as our own.
You were a beautiful and bright star in our lives and remain so in our hearts, our great and dear friend. We will miss you terribly.
Love always,
Paul, Jennie and family