I sent my son to school today despite the fact that he woke up feeling nauseous, sick enough that he couldn’t eat his breakfast. “Maybe it’s nerves.”, I suggested unconvincingly. “Try some deep belly breaths.” He had an outing today, an outdoor activity, the kind of thing that would normally cause him some anxiety.

The bus picked him up on time but I didn’t feel any relief, only vague worry and of course, guilt. I had two important clients this morning. The visits had been coordinated with other workers who were to meet me there at a designated time. They wouldn’t be easy to reschedule. I had to go into work.

And anyway, what if he was faking a stomach ache to get a day off?

I’d written a note to Ian this morning to validate my suspicions that he was faking. Ian is an elementary school teacher. He knows these things. Not to mention he’d faked his fair share of stomach aches growing up in order to get out of going to school.

I saw my clients and got through a busy day but the unease never left me. On my way to pick up my boy, I called the school daycare to give them a head’s up. Madame Lise answered the phone. She said Sean was sitting next to her and was feeling very sick. I told her I’d be there as soon as I could. At 4:55 pm, exactly ten and a half hours after he’d told me how awful he felt, I picked up my son. He was white as a ghost, biting his upper lip, trying not to cry. He’d spent the whole day sucking it up, waiting me for me to pick him up, confiding he wasn’t well only when it became unbearable.

Once home, I gave him a children’s gravol and sent him to his bed where he slept for two hours straight.

“So how’s the little faker?”, Ian asked, when we touched base after work.

“He wasn’t faking after all.”

“You know, we talk about parents like you, the ones who send their kids to school when they’re sick.”

“No need to talk about me. I’ve done enough talking to myself since I picked him up.”

I’d told Sean I was sorry he’d had such a difficult day, but what I was really doing was apologizing for letting him down. This morning, my gut tried to tell me the truth while my head shouted excuses. Ironic that I’m a healthcare worker by trade. I got a lesson in parenting and priorities today. 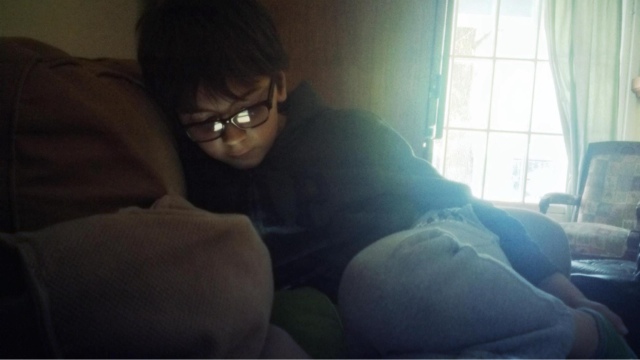 She met books. And they lived happily ever after!

a look into the mind of a crazy indian girl

An experiment conducted for my personal amusement

Read my mind. Little stories in a big universe.