I haven’t taken any sick leave in over a year, the incentive being an extra paycheck for unused days, right before Christmas. As it happens, tomorrow I will take a couple of hours off to watch my son participate in a cross-country race. Because he asked me to.

He hasn’t been training for long. In fact, it’s only been once a week for the past month, at school, before classes start in the morning. I like those days because I get to the office early after dropping him off and feel like we are both getting a productive start to the day.

Truthfully, I could do without the race but it is included with the activity fee, tee shirt and all.

I want my son to run because he can already put one foot in front of the other and running simply means doing so at a faster pace. It’s what the literature recommends for DCD kids. Activities that involve reciprocal movements of the arms and/or legs such as swimming, cycling or running. Of these three activities, running is the only one he can do with relative ease. We have been working on swimming in an adapted program for the past seven years. Cycling, the past four. It’s been exhausting for all of us but particularly for him, because the gains are so slow in coming and he is so behind in everything. Deep breath, mummy. One day at a time.

I decided the best strategy was to prepare him both physically and mentally for not winning the race, even though I know he secretly wishes he would. So we have been training on my treadmill, trying to improve his individual time and speed, without having to compare himself to others. We’ve also been working with the occupational therapist on things like technique and breathing.

The most difficult part however, is the mental preparation. It takes incredible persistence on his part to learn a new motor skill let alone improve upon it. And even with all his hard work, the payoff is at best, mediocrity, all of which take a toll on his self-esteem. “I suck” or “I’m not good at that” is a pretty common refrain these days and while I don’t feed into it, we do discuss how he feels about things. So the challenge is to avoid setting him up for failure and to find a deeper meaning to the race, something that will stay with him longer than any medal would, long after the runner’s high has faded. 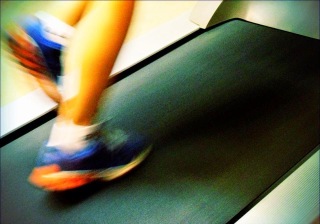 I hope the race is a positive experience for him and that running remains an activity he can pursue long term for all its health benefits.

I will be watching the race with my heart in my throat tomorrow, cheering for my boy.